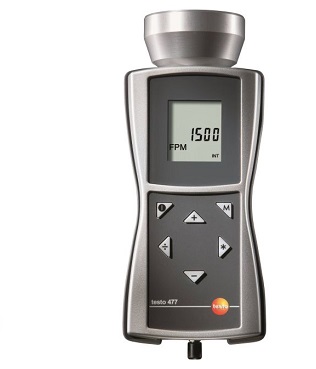 Testo 477 LED Hand Stroboscope, carry out inspections and quality control of machines and systems, rotational speed measurements of hard-to-reach, small and fast-moving objects, even when the machines are still running.


The testo 477 LED stroboscope makes stunningly fast movements look as if they are taking place in slow motion. This allows you to check and inspect machines and systems while they are still running, and measure speeds of up to 300,000 rpm.

It is impossible to tell with the naked eye if the thread guide of a knitting machine is working properly. It is therefore equally impossible to tell if there are any irregularities in vibration or rotational processes of machines or systems. But it’s a different story with the testo 477 LED stroboscope. That’s because the stroboscope emits a series of flashes which makes what you see appear as a “frozen image”.

The testo 477 LED stroboscope can also measure the rotational speed of very small and hard-to-reach objects. And because there’s no need for reflex marks, there’s no need to stop the machines and no disruption to production processes either.

An extremely high measurement range of up to 300,000 flashes per minute (fpm) and a very high illumination of up to 1500 Lux allow you to carry out rotational speed measurements of up to 300,000 rpm. A trigger input and output ensure connectivity to external systems and control via an external sensor.

The LED stroboscope’s integrated impact protection and sturdy IP65 rated housing(which also allows it to be wiped down) ensure that the testo 477 can stand up to the rough and tumble of everyday use. And thanks to a longer battery operating time, you can carry out uninterrupted measurements for up to 5 hours. 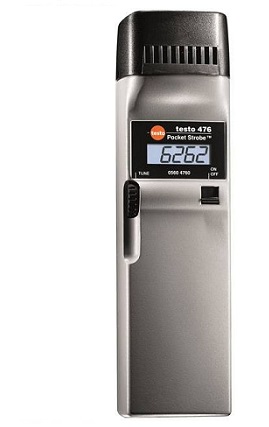 Testo 476 hand-held stroboscope with high-intensity light. Ideal for rpm measurement and for the inspection of parts moving at high frequencies.


The testo 476 hand-held Xenon stroboscope with high-intensity light allows fast-moving objects to appear in slow motion. In doing so, the hand-held stroboscope measures and checks rotational and vibratory movements. It enables measurement of very small objects or in inaccessible places – what is more, without any interruption to the production process. The testo 476 is therefore ideally suited for rpm measurement and for the inspection of parts moving at high frequencies.

Where the testo 476 hand-held stroboscope is used 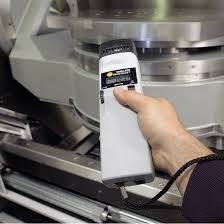